Parts I and II of Scattered Voices had featured sounds that were often quite metallic in nature. For Part III, we set about trying to think of locations that might contrast well with the first two, and give us new sonic material to improvise with. Our search brought us to the Berwyn Mountains in Wales, to record sounds from the UK's highest single drop waterfall, Pistyll Rhaeadr.

Originally we planned to record several sets of samples which would form a narrative, following mountaintop streams and tributaries down towards the waterfall. We arrived armed with two microphones and two cameras for above water and below water recording.

On our first day's recording we set about collecting sounds in the reverse order of our narrative structure. Starting at the waterfall, we found that any interesting sounds above water were engulfed by the roar of the waterfall in the background. The sound of the waterfall itself also lost a great deal of character when recorded to the mono channel necessary for our instruments. Our underwater sampling efforts had been focused on quieter pools downstream from the falls. The hydrophone I had built for the trip wasn't heavy enough to sink, and weighing it down greatly limited what and where we could record.

As we moved uphill from Pistyll Rheadr, we decided to follow the streams leading up to a hilltop lake, Llyn Lluncaws ('Lake Cheesepicture'). The streams we encountered on the way up the mountain offered some good sounds, but lacked any strong variety with those from the falls. The weather worsened very quickly as we approached Llyn Lluncaws that afternoon. The steep banks at the waters edge didn't give us many possibilities for recording. It didn't take long before a very cold and demoralised improvising trio turned back downhill in search of a warm pub somewhere. 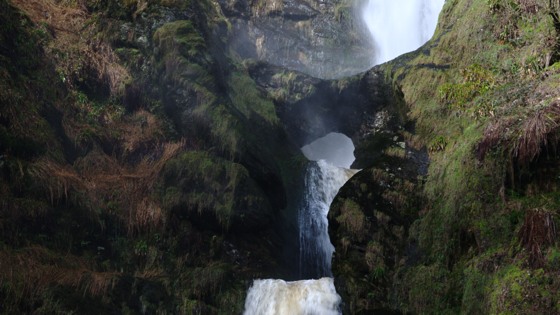 Listening back to the first day's recordings, we found the most interesting samples came from underwater areas where there was moving/rushing water. Thankfully, we had left time for several days recording and had the opportunity to go back. The original idea of following the sounds downstream didn't fit with what we had found on location. All the most interesting areas centred around the turbulent pools, rocks and white water at the foot of Pistyll Rhaeadr. It was useful to be able to take what we had discovered about the location and let this shape the recording process.

The second day's recording focused entirely on exploring the active areas at the foot of the waterfall. We had also remedied the hydrophone problem with the cunning use of some electrical tape and a rock. We then found a variety of textures varying in intensity and character which were ideal as source material for our music. The video footage was mostly collected using a GoPro camera in the areas where the sounds were captured, and revealed a similar variety in bubbles, eddies, foam and even some fish. 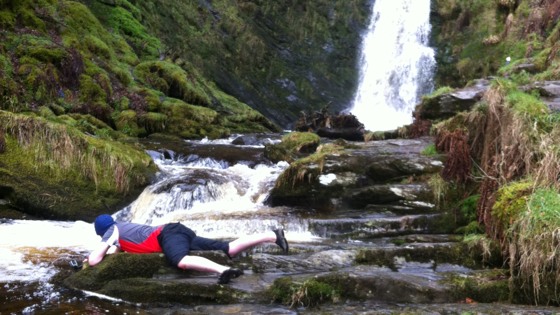 The sounds collected for Scattered Voices: Part III did not disappoint in providing us with fresh musical challenges. As they were captured with a hydrophone, they have a more compact frequency range, and less activity at high frequencies. The source of these samples is more identifiable than those of the previous recordings. This has tested our ability to re-invent and transform the sounds we work with, and has driven new developments in our instruments and the way we use them.